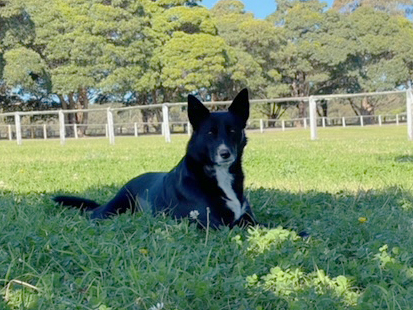 Ryley is our 5-year-old Border Collie x Kelpie. She is friendly, energetic, loyal, obedient, intelligent and inquisitive. She got her name from the country town where she was born – Rylestone.

Ryley is our companion and the reason why we go for walks or runs, even when we don’t feel like it. She loves chasing waves, playing tug of war with her fluffy and squeaky toys, chewing large bones and burying them around the yard, exploring hidden places and greeting everyone walking past our house by racing up and down the fence line.

Ryley was diagnosed with B-cell lymphoma in July 2021 by our local vet. My husband was giving Ryley a pat and noticed a few lumps on her neck. We had also heard her coughing a few times. When we took her to our vet at Burwood Road Veterinary Clinic, we never thought it was anything serious, as she never seemed unwell. She had her usual appetite and energy levels.

We were amazed when our vet said it was lymphoma and that her life expectancy was weeks to months. It was confronting to have that diagnosis. We didn’t want to put her through anything drastic, which would make her more unwell and affect her quality of life. We felt that chemotherapy was not an option as life expectancy is still not much more than 1 year. Our main aim was to hopefully extend her life, but more importantly maintain her quality of life.

We immediately started researching clinical trials and found Dr Sonya Yu (Animal Referral Hospital), who is involved in the MPL Trial. I am a nurse with some experience in clinical trials, so I had a bit of an idea of what I thought would be a suitable trial. This trial guaranteed that she would actually be on the medication – not a placebo – and it didn’t involve an excessive amount of invasive investigations and clinic visits.

The MPL trial has been a positive experience for us. Dr Sonya is fantastic and has been wonderfully supportive to Ryley and us. It’s been easy to give Ryley two tablets a day and fortunately we live quite close to the Animal Referral Hospital, so it’s been easy to take her for the visits.

Our GP vet was also supportive of the trial, and it felt reassuring to do something. 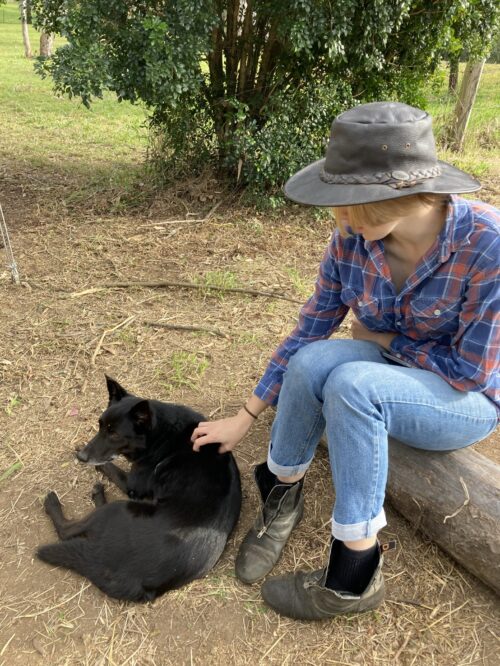 Chica was a Black Kelpie born on a farming property in WA. She was a very active and very smart little dog with and incredible capacity to respond to your mood.

We got Chica when we were living in rural WA having returned from 5 years living in Peru where we had to leave our family dog.  She was named Chica as it means little girl in Spanish.

We went to a farmer’s market and our daughter’s friend had a litter of puppies for sale. Chica was being pushed around in pram with a baby’s bonnet on. We bought her for $25 and the farmer threw in a couple of bales of hay.  He regretted that decision later when she turned out to be a very good herding dog.

Chica’s favourite thing to do was to be by your feet in the paddock “helping” with whatever we were doing! She was diagnosed with lymphoma in April 2021 when I took her for a check-up as she had a small lump on her face and had been a little under the weather.

When she was diagnosed, we began looking for alternatives to chemotherapy. My vet had heard about the Monepantel trial and researched it for me before referring us to the Animal Referral Hospital in Brisbane, which was participating in the trial.

The trial was very straight-forward, clearly explained and did not require much from us in terms of input or reporting; just a simple diary and to give the medication (tablet) every second day.

Unfortunately, we had to have Chica put to sleep on October 10th. Until the last week she was almost completely normal, with occasional periods of quieter behaviour than unusual.

She was originally given 2 – 4 weeks to live and went on to have a great quality of life for nearly six months, so we are very grateful.

My advice to other pet owners is early detection and knowing what is and isn’t normal for your dog is important. Diagnosing the lymphoma early gave us time to do something about it to slow it down.

The trial gave us an alternative to chemo (which wasn’t an option for us), slowed the progression and gave us more time with Chica. We would really like to support the trial to continue as I really think it gave us a significant increase in time and quality of life for Chica. I’d love to see others have the same opportunity without the invasive treatment of chemo.